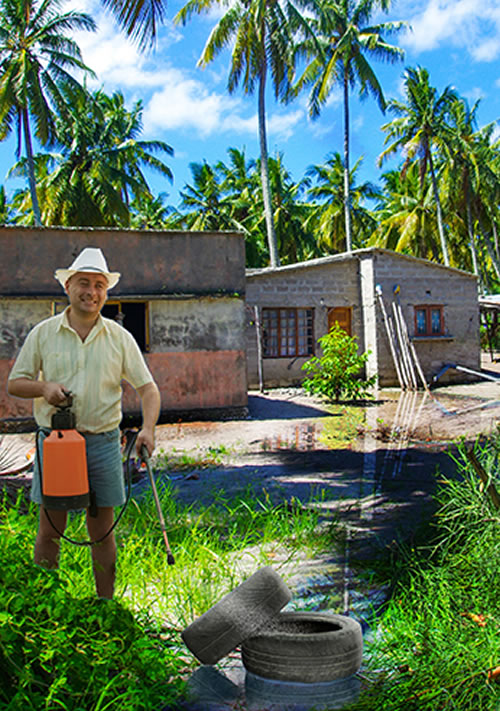 Insect-borne diseases often strike remote and impoverished areas. Many times hand-spraying pesticides is the only affordable means of controlling the disease transmitters, or vectors. However, such spraying always falls short. A substantial percentage of the sprayed pesticide is lost to aerosol drift. Mosquitos and other insects often live in nooks and crannies that conventional spraying doesn’t reach.

4Ry’s Charge Injected Precision Spraying (ChIPS) uses the patented Spray Triode Atomizer, which charges the pesticide. Each droplet is negatively charged when it leaves the nozzle. The charged droplets go to a ground, the target being sprayed, greatly reducing aerosol drift. The target is uniformly and thoroughly coated, even in hard to reach areas and on irregular surfaces that current spraying misses.

The negatively charged droplets repel each other. This Coulomb repulsion, named after the scientist who discovered it over 200 years ago, and the Spray Triode Atomizer create a precise, directed spray. With conventional pesticides, large amounts of costly water, propellants, and fillers are required to create a serviceable spray. Only a small percentage of that spray is the pesticide’s active ingredient. With ChIPs, only the active ingredient is required. The unnecessary ingredients are eliminated.

A container of pesticide active ingredient and ChIPS covers a far larger area than one filled mostly with water, propellants, and fillers conventionally sprayed. Spray operators will have a much greater range. The active ingredient spray will be more concentrated and effective. Unlike conventional spraying, little is lost to aerosol drift. There is less inhalation risk for sprayer operators and bystanders. The target area is completely coated.

Economies are crucial in impoverished areas where foundations and other nonprofit organizations, governments, and businesses operate on tight budgets and limited funds. If insect-borne diseases are to be controlled and eradicated, pesticide spraying must efficiently reach where vectors actually live and propagate. 4Ry’s ChIPS technology offers a lower cost, more effective way to fight this global problem.