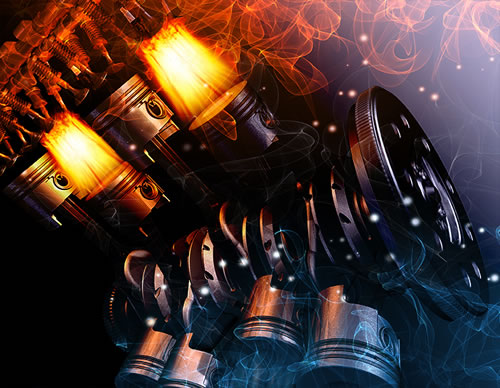 Unlike a traditional gasoline engine, a diesel engine does not ignite diesel fuel with a spark plug. Diesel fuel is pressurized and injected by the fuel injector into a combustion chamber filled with hot, compressed air, where it ignites. The piston that compressed the air is pushed down, and that motion and energy power the engine.

A diesel fuel injector pressurizes diesel fuel and injects it into the combustion chamber. However, the spray is relatively concentrated, preventing many of the droplets from interacting with the air and igniting. This causes engine inefficiency and the droplets that are not ignited become sooty particulate waste.

4Ry’s patented Spray Triode Atomizer charges a sprayed fluid. All of the individual fluid droplets are negatively charged. They repel each other, a force first identified and described by Charles-Augustin de Coulomb over two centuries ago.

The Spray Triode Atomizer and Coulomb repulsion reduce the pressurization and energy necessary to inject diesel fuel into a combustion chamber. They significantly increase droplet dispersion and mixing within the chamber. The charged, dispersed droplets combust more thoroughly than those from a fuel injector’s spray. More complete combustion increases the diesel engine’s efficiency. An added benefit: ChIPS is less of a power drain on the engine than a conventional fuel injector.

4Ry’s simulations project that replacing conventional diesel fuel injectors with ChIPS technology will increase diesel combustibility and reduce particulate waste and other emissions by 5 to 10 percent. However, specification of the exact percentage awaits development of a prototype engine and field testing.